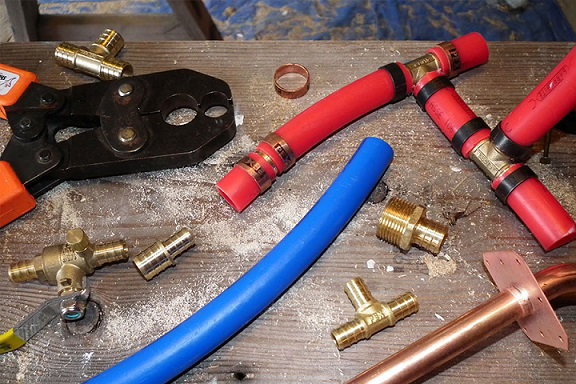 Plumping is often something that we don’t think about unless something is wrong. It shouldn’t be ignored though because problems such as corrosion, limescale and tree roots can lead to extensive damage and a plumbing repipe.

Corrosion in pipes is caused by the properties of the water they are transporting. The water’s pH level, oxygen level, chemical makeup, temperature, and velocity all contribute to the rate of corrosion. Although copper piping is typically good for decades, depending on the factors above your pipes may need replacing in as little at 2 years! Look out for rusty coloring on pipes and any discoloration in water for signs of corrosion.

Corrosion in pipes is a serious problem as consuming high levels of metals such as lead and copper can lead to very serious health problems.

Even if the water is not for consumption it eats away at the pipes eventually leading to leaky pipes. Not only will leaky pipes hike up the cost of your water bill but it can do extensive damage to your house. If you see any signs of corrosion or discoloration of your water call a plumber ASAP.

Hard water is water with high levels of magnesium and calcium. When hard water flows through pipes it leaves behind residual minerals forming deposits called limescale. As the deposits build, the pipes begin to clog causing a gradual decrease in water pressure. Lime scale is dangerous because it becomes tougher to remove the longer its left and eventually will be permanently stuck without damaging pipes. To prevent lime scale, homeowners should arrange for their pumping system to be tested for hard water once a year. More on How Hard Water Can Damage Your Home’s Plumbing System.

Tree roots are a very costly issue if left unattended to. They are attracted to the warmth, water and oxygen found in pipes and will seek them out in the soil. Once they find the pipes they’ll gradually work their way into them and then begin growing inside of them causing root intrusion. The root system expands in the pipes collecting sewage from the homes and forms blockages. You may find you’re having frequent clogged toilets or from other pipes a drop in water pressure. Even worse, if left the roots will eventually burst causing massive amounts of water or sewage being released into your yard.

It’s possible to take preventive measures though. Find out where your laterals and sewers are located and avoid planting trees within ten feet of them. If you’re unsure if a tree’s roots have already compromised the pipes you can have a plumper run a camera through them to check the wall integrity.

Corrosion, limescale, and tree roots are major potential problems that not only can cause extensive property damage but can also have a negative impact on your health. Many problems can be noticed by watching out for drops in water pressure and scheduling regular plumping checkups for your home. Save yourself money in the long run by attending to any of these issues early. You may just avoid a full plumbing repipe.

If you are considering a repipe in Mount Dora Florida, Lake County, or the surrounding area, don’t hesitate to call Blue Sky Plumbing where there are NO EXCUSES only solutions!

Should I Replace the Plumbing Pipes in My Home?